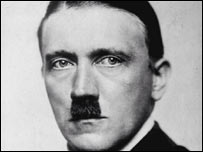 German postal staff ensured a postcard to Adolf Hitler sent from England got to its destination, despite the Nazi leader being dead for 60 years.

If that had been the royal mail, you can bet that the post card would have been stuffed in a hedge some where and would have never been delivered. The royal mail is heading down hill fast with the amount of emigrate labor they are using in London. Mabye if they paid decent wages people would want to work for them.