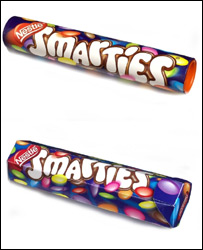 Nestle Rowntree is to replace the beloved 68-year-old cylindrical design with a hexagonal or six-sided pack.

No they can not replace the Smarties tube with that crap! I used to have loads of letters when I was a kid collecting the tops was the only reason I bothered to get smarties.

At least they are only changing the box, does any one remmember Marathon's and Opel fruits or what about jif.

O yes Jif why did we change the name again? No one in Europe could say a J so they changed it to Cif. No that it was called Jif in the EU, they just wanted to save money by printing one set of labels and haveing one set of crap adverts they could doubed from one country to another. I have not bought Cif and don't intend to.