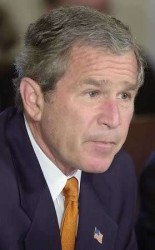 To a viewer, each report looked like any other 90-second segment on the local news. In fact, the federal government produced all three. The report from Kansas City was made by the State Department. The "reporter" covering airport safety was actually a public relations professional working under a false name for the Transportation Security Administration. The farming segment was done by the Agriculture Department's office of communications.

It would appear that Bush in his effort control the media, finding that he can not buy it all. Decided that his best bet was to give it away, Bush has giving away more government news stories than any one else.
How many more Jeff Ganon's are there?
Posted by Wes at 7:06 pm