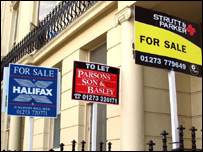 I have been wanting to talk about his for a few days but have spent my time thinking about what I wanted to say before hand.

For those of you not in the UK a bit of back story basically in the last 3 or 4 years house prices in the UK have jumped by 60% but mainly in the last 2 years. In the south in London mainly they have risen by even more.

To understand this you have to understand the culture in the UK. Nobody rents everybody buys their house. People in the UK see renting as wasted money, the only people who rent are those who are moving home and have to kill some time to make the sale happen, or the poor and the government is paying their rent for them any way.

Its possible in the UK to get a 100% morage, someone earning twenty thousand pounds a year could probley borrow up to 4 times their salary or if you are a couple 3 & 1/2 times your combined salary.

Altought with the current housing madness that has gripped the country some company's are willing to lend up 10 times your annual salary. As well as new offerings of 130% of the properties value so you can pay of depts too. that's not going any where near the abuse of self certification morgages for the self employed.

compare this to places like Germany where you have to have saved up 40% to 50% of the price of the house your self and they only match your morgae.

The problem is that houses prices are so high that 1St time buyers have been priced out of the market after all never mind the cost of a home you than have all the extra's like solicitors fees and stamp duty. You can add on up to another 15 thousand pounds.

Average-priced homes in 548 out of 597 main UK postal towns were beyond the means of people on average salaries, according to the study for the Halifax Bank.

In fact things have become so bad that 98% of city's in the UK, 1st time buyers have been priced out of the market.

If that is not a warnign that things have become stupid then I don't know what is?

The government this week anoucend a schema where buy essential workers would be able to buy a house and the local housing authority would buy half of the home. This would help 1st time buyers get the feet on the ladder.

One, that when these people come to sell their homes in 5 years time, If house prices keep rising the housing aurtiteys are going to have to find huge some's of money to buy back the other half of the propitry or risk losing housing stock. As most of the homes involved will be coucil houses, and to avoid the council's running low on hosing stock they would have the right to 1st refusal to buy the propitry back.

Two, all this servers to do is to keep the housing market araficliy high by allowing those who would not normally be able to do, to buy homes. So rather than forcing a equalization between demand, availability and price. This policy in fact keeps the housing market artificially thus keeping prices high.

There is only one solution to the UK problems house price crash and for all the market and media saying their will not be one they are only delaying the inevitable.

The low interest rates of the last 5 years of around 4% have lead to an all time high of personal debt. The government may have spent the last year raising interest rates 1/4% at a time to get us to 5%.

That how ever is no where near enuth to stop people bowring more than they should. There are new story's all the time about people who are running up £60 thousand on credit cards and then committing suicide, because they can not copy with the debt.

The market can not sustain this I know lots of 1st time buyers who are waiting for the crash to come before they will consider buying a house.

Think about this, when men used to go out to work and woman stayed at home one salary was enuth to pay the bills and put food on the table. Women then started to work people had more money and people bought more stuff including bigger houses.

Now it takes two salaries just to buy a house never mind any thing else. With 1st time buyers priced out many people are stuck living with their parents. What is going to happen in the future?

Is it going to take 3 salaries to be able to buy a house. Are parents going to have to ask their kids to chip in with the morage so they can all move some where bigger? Is the UK going to end up like Japan, with generation morgaes? and kids living at home until they 30?

Or are we going to have some common sense and let house prices fall for the good of us all?

The UK is after all an island there is only so much space for new homes, or could the UK government and the BBC be league with each to try and sovle the problem another way.

Think about this, I am off work sick at the moment so have nothing better to do than walk the dog and watch TV. The BBC and channel 4 are full of programs about people in the UK who are selling up everything and moving to the EH for a better life.

Could this all be part of some master plan to get the older UK residents to leave the country and thus make room for the new generation?

Could it be even more sinister, The EU population on a whole is growing old what if their where some sort of deal where buy we ship of are aged population to the EU along with all there money. Generating a lot of investment in the EU and jobs as most of these people are only about 30 or 40 and still have to work, most set up some sort of small business.

This would then revamp the EU and make space in the UK.

We in UK take all the young emigrants that we now have room for and need to jobs we wont like pic fruit be doctors and nurses all that sort of stuff.

The south of the UK, Is already full of emigrant so what's a few more, once they have been here a few generations they would have full UK citizenship and be able to move in the EU and repopulate it, but they would be British citizen's which would make them more acetable.