Big 4 alley for the sake of DRM 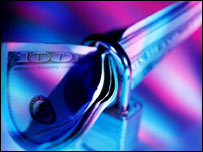 Sony, Philips, Matsushita and Samsung are coming together for the common good of DRM.

The big four realize along with every one else that if we stick with this disparate cracked sphere of DRM we have at the moment then DRM is doomed to fail.

Their solution is to come together to create a common DRM format that can be used on Multiple devices. They have finally realized that pulling in opposite directions only helps pirates as people want to chose what they do with their data.

The only choice that these company's have is to alley them selves with each other to try and keep control of the market as it slowly slips out of their fingers like grains of sand in an hour glass.

Ultimately unless there is one grand DRM for all it will never succeed, plus with the advent of the modern PC they are losing control not only of the media but the medium and the platform. Where as once they could reign total control over every part of the process now home PC's provided a loop hole in the system, that they can not close.

Until Microsoft gives them palladium, but even that will not stop the rot, do you think the Chinese are going to stand idle by while the USA creates a system of control that would ultimately give them control over all the PC's on the planet.

If so why are they investing so much in R&D they already have their own 486 processor and I am sure with a threat on their iron grip on power it will not be long till they have faster chips of their own.

Their are already survilists out there, not your michigan militia type stockpiling guns, these survilist are stockpiling PC's without palladium. The bottom of their wardrobe's are full of laptops they are ready for when the internet stop's being a place of free exchange and is renamed Microsoft.NET.

Do not think are government's are going to be their to protect us either they would love the level of control palladium offers. Think about it some one in UK government leaks yet another government dossier, only this time not only is the copy digitally traceable to the source, but they all so have the power to contact Microsoft and say we want to suppress this file.

A Signal would simple be sent out across the net and no palladium crippled PC would open the file in fact if it was on your hard drive it would be deleted. Is this really the world we want to live in?

Using palladium the government would even be able to limit who would be able to print out the file, stopping the paper trail. If you think this sounds bad the UK goverment stopping whistle blowers. Imagine in Africa the atrocities that could be covered up, these would be of far more consequence.

To late we are already there palladium is already in the processors of all the new PC's and slowly but surely is being introduced into the supporting hardware too. Why do think that windows XP force's you to relicence your software if you change a major hard ware component.

In the future image a world where they will not turn on your copy of XP unless all the parts in your PC are palladium crippled too. The EULA that no one reads will have a new paragraph about Microsoft's right to delete what they deem to be illegally content off your hard drive at will.

With a click of your mouse you will give away control over the contents off your hard drive. That is why Microsoft is using it's "partners" to try and stop the uptake of Linux after all once it gets in to council offices it is not long before people, ordinary people start to use it at home.

Imagine if we all used a totally free, totally open operating system how would they make a profit then? How would they control us? What would we do with are new found freedom?