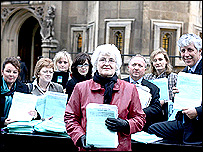 Why is it in this day an age that if you lose a child it suddenly becomes your right to change the laws of this country if you can get enough board house wife's to sign a bit of paper?

because this is going to make us so more safer, not!

You only have to read the governments own consultation to see that out of 313 people who where questioned 223 thought the new law was a bad idea.

Their report says about 50,000 people signed a petition asking for these laws. Of those, 90 responded to the consultation in favor, ie excluding organizations - such as GCHQ - who submitted a response. Yet 223 individuals responded against. That suggests a large number of people are privately against the proposals. So this might not be a wise political move for a Government already under broad attack for dismantling civil liberties.

Even the BBC is having to defend its self after being inundated with so many messages against this law that the editors of the Ten o'clock news has had to comment on the official BBC blog.

Out of 71 comments the majority think this law is a bad idea, apart from Liz Longhurst, and here 50k army (most of which probably only signed up because they where ambushed on the street and signed out of pity or guilt, after all why do you sign any thing in the street?) No one thinks this is a good idea.

I have already emailed my MP using writetothem.com I love this site and use it to talk to any of my elected representatives any time I have a problem with he way the country's run, and the best bit is they have written back 100% of the time.

So stopping letting our government get more and more detached from the majority while the vocal minority takes over!

Go and let them know how crap this law is.
Posted by Wes at 8:01 pm

Would like to add that there is an organisation set up to co-ordinate the proposals called backlash.

They can be found here
http://www.backlash-uk.org.uk/

(Today is blogging for Backlash Day).